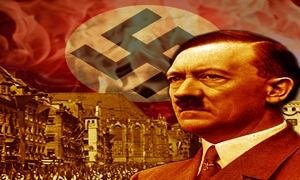 This is one of the most interesting topics surrounding the subject “Adolf Hitler” who was seen as one  of the most controversial dictators ever.

This Man Adolf Hitler, is now speculated to be a christian according to a conversation on Christian Broadcasting Network. Here are the reasons they give for and against it.

As the Chancellor of Germany, Adolf Hitler In his speeches, he challenged people to love their neighbors, to care for the poor and sick, and to take a stand against violence.

“His speeches were filled with hope,” says Ray Comfort, the author of Hitler, God & the Bible.  “He says ‘I’m going to restore the glory.’ He also said that ‘I believe I am acting in the sense of the Almighty Creator.‘”

In public, Hitler often referred to himself as a “follower of Christ.”  Even today, many people still believe the Holocaust was carried out in the name of Christianity, but what was the real relationship between God and Hitler?

“Adolf Hitler was the nastiest, most hate-filled, almost wickedest man in history,” says Comfort, “and to say that he was a Christian is to be tremendously ignorant, or to be disingenuous.” As a child, Hitler was baptized into the Catholic Church.  He was an altar boy, and at one point he even wanted to become a priest.  But as history would later show, a church member and a Christian are two different things.

From his earliest political speeches, Hitler invoked God: a smart political move in the mostly Christian nation of Germany.

One of Hitler’s most public shows of solidarity with the Church was the signing of the Nazi-Vatican Concordat in 1933.

“That pact was that the Catholic Church would support Adolf Hitler politically, and Hitler would make sure they had freedom of religion,” Comfort explains. “Hitler in 1933 said wonderful things about Christianity. He even said he hated atheism and wanted to get rid of it in the country, so Hitler was a wolf in sheep’s clothing, and he did pull the wool over the Catholic Church.”

So if Hitler wasn’t a Christian himself, why did he go to so much trouble to win the support of the Church?

This was one hot topic looking at Hitler as a person who had his own Bible and also at one point hated the church persecuting pastors who were against his ruling.