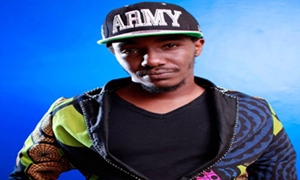 Groove Award Winner (Hip hop Artiste of The Year 2012) Kris Eeh Baba is one cool guy who i feel you need to meet if you haven’t met him before, as you would just fall in love with his love for Jesus Christ. Many of us might not know where our gospel musicians started from, some of them ride cars right now and others own houses but that didn’t just fall on them at the snap of a finger.

Kris is not an exception to this case as he has gone through ups and downs in his music career. He was singing ragga before he started singing hip hop which didn’t go so well for him. So while he was trying to get through in music and not being able to succeed GOD sent him an Angel in form of a guy called Majic Mike. On one special day Majic Mike, a music producer was at an event which Kris was performing and after seeing Kris he saw a potential in him and set an appointment with Kris to do sound for him.

Kris was so excited and he took to the studio on a later date to be done for a sound recording by Majic Mike. So the funny part of the story is that when Kris Eeh Baba was supposed to submit his payment for the recording he only removed  Ksh.200/= from his little pocket.

This was one great surprise, because if i was the music producer i don’t know how i would have reacted. But Majic Mike understood him and he sent him to go and buy for him a plate of Chips (Fries) and sausage with the Ksh.200/= which Kris had submitted for the recording.

To cut the long story short, Kris and Majik Mike were not brought together by circumstances but its GOD who changed Kris Eeh Baba’s setbacks into comebacks by bringing Majik Mike in his Life.

Check the new video they have done together “I AM FREE” below.