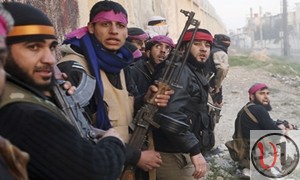 Bumped onto this Open Letter written in respect to the ongoing tussle in Syria. Like the terrorists who are in Syria today, Saul promoted the killing of Christians. Saul had a personal encounter with Jesus Christ on that road, and he was turned into a man of peace by the power of God.

What might America accomplish by sending missiles in the direction of Syria as is being discussed? Well, we know what missiles won’t do. They won’t penetrate deep enough to change the hearts of men who are intent on evil and all manner of terrorism. Missiles cannot change the hearts of military and political leaders or the citizens of any country. Men need Jesus in their heart if they are going to be transformed from terrorists into missionaries of the Gospel of peace and salvation. That is exactly what happened to Saul in Syria a long time ago. It’s not just Syria, however. Look at other nations in the Middle East. When have American missiles, or any other missiles for that matter, ever changed the heart and soul of a nation? While the need for military action can certainly appear justified at times, let’s not kid ourselves. The Middle East will never experience change for the better merely by missiles. Those weapons do not penetrate deep enough to transform a country. What Syria needs today are some “bunker buster bombs” of a different sort. The kind that bring about true and lasting change for peace. The apostle Paul came to learn firsthand about the power of these weapons. He wrote, “The weapons we fight with are not the weapons of the world. On the contrary, they have divine power to demolish strongholds.

We demolish arguments and every pretension that sets itself up against the knowledge of God, and we take captive every thought to make it obedient to Christ.” (2 Cor. 10:4,5) Talk about powerful weapons!

America was founded largely by people who deeply appreciated and employed the approach used by the apostle Paul. They were grounded in Scripture and filled with Christian love. They believed firmly in the Gospel message of forgiveness through faith in Christ’s death on the cross. It shaped everything they did and everything they longed to see America experience as a nation.

Syria desperately needs the Gospel rather than missiles. Nothing else will penetrate deep enough to transform killers into caring and compassionate human beings.

We can learn a lot from history, and from those who practiced the Christian message of love which they proclaimed. It was more than talk. It had power, and it resulted in change. The truth and the power of the Gospel make all the difference in the world. America’s leaders in Washington would be wise to consider the incredible power of these Christian “weapons.”

The terrorist Saul personally experienced this divine power, and the rest is history. But will we learn from history, or just continue repeating the same mistakes over and over again?