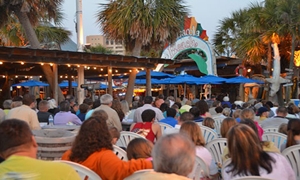 A Florida Pastor who recently left the United Methodist Church has started up a new congregation at a beach bar so as to reach out to those uncomfortable with the traditional church setting.

Pastor Jack Kale oversaw the first prayer service for Central Waterside Church at Bimini Beach Bar in Hemingway on Sunday. The congregation is part of a megachurch based in Las Vegas.

In an interview with The Christian Post, Kale explained that in recent years he had led a beach bar church called “Worship at the Water” or W@W on behalf of Gulf Breeze United Methodist Church. “Over the last four years, I began to experience a different kind of church that was based on simple worship and an organic lay leadership structure,” said Kale.

“What started out as a missional service to the beach crowd became a third campus of a large UMC congregation. It has grown to be the largest single service, averaging 450 in a church that averaged a total of 2400 people in seven services every Sunday.”

Central Waterside Church is a satellite of the Las Vegas, Nevada-based Central Christian Church, which hopes to found several congregations along the American coast similar to Kale’s. In 2012, attendance at W@W was not the largest service of the church, according to multiple sources.