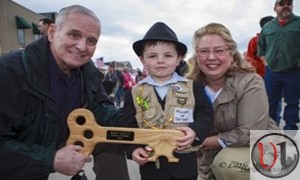 Although the story only made national headlines after a local news team covered a fishing event near Dorset and discovered the pint-size politician, for Bobby, who was elected last August, it’s just business as usual.

He was named mayor at the town’s “Taste of Dorset” festival after would-be candidates who live in and around Dorset paid the $1 ballot charge to throw their names into a hat. The seasonal town, which boasts only 26 residents and 14 businesses, elects a new mayor every year from a pool of campaigning candidates who in the past have included chickens and cats.

According to Bobby’s mom, 34-year-old Emma Tufts, the toddler ran a two-month campaign starting in late June 2012, visiting local restaurants and handing out pins with his photo imprinted that read, “Vote for Bobby!” In August, his name was picked out of a hat. “He was so excited and told everyone at daycare that he was going to be mayor forever,” Tufts told Yahoo! Shine.