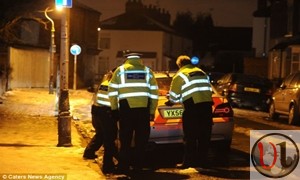 A 52-year-old man killed his own son because he had had enough of being teased.

Stephen Hall, from Hull, confessed to murdering his son Keith McGlone, 26, to an emergency services operator.

He claims he stabbed his son with a kitchen knife because was fed up with being called an ‘old man’. The details of the 999 call have been released by police.

‘I don’t know if he’s alive or dead. I stabbed him in the living room and now he’s in the bathroom.

‘I said summat and he argued with me and then, all of a sudden, I just flipped.

‘I was sick of him always picking on me and calling me an old man and everything.’

Hall is due to appear in Hull Crown Court for sentencing today.

He pleaded guilty to murdering his son in their East Yorkshire home by stabbing him twice in the chest and abdomen before calling emergency services.

Father-of-two, Mr McGlone, had recently moved back in with his father.

The court was told that the two had been heard arguing in a pub. Hall is said to have been on anti-depressants for 18 years.

He was seen carrying the knife outside his house by neighbours, on the day of the stabbing.

He told 999 operator Louise Robinson he had put the knife in the sink after the stabbing.

The police operator kept Hall on the phone until officers and paramedics arrived at the home in January 21.

Detective Chief Inspector Alistair McFarlane, senior investigating officer, said: ‘This is a tragic event, which has led to the needless death of a young man.

‘The family is not only having to cope with the loss of Keith in such violent and unnecessary manner, but also with the fact that it was at the hands of his father.’