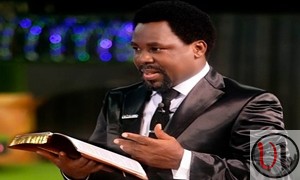 This was one shocking story which just struck my eye when i read it.

Four people have died following a stampede at the Ghana branch of the Synagogue Church of All Nations on Sunday, when thousands seeking divine intervention besieged the church premises to benefit from the distribution of ‘anointed water’.The anointed water was said to be a gift from the head pastor of the church, Prophet T. B. Joshua, who had announced during a church service at Lagos on Sunday, May 12, 2013 that the repackaged anointed water would be sent to the other branches of the church across the globe.Some members of the congregation, their relatives and first-timers from the length and breadth of the country, who did not want to miss out, spent the night on the church premises as the compound was said to have been filled to capacity by 8:30 p.m. last Saturday.Reports say those who could not get into the church premises pushed a number of barricades and police personnel on duty away, resulting in the stampede which claimed the lives of the four people; three men and a female.The report added that more than 20 other people were seriously injured in the stampede and rushed to the Police and 37 Military hospitals.The incident resulted in the cancellation of the church service, which was to start at 9 a.m.Confirming the casualties to newsmen in Accra, the Accra Regional Police Commander, Deputy Commissioner of Police Mr Christian Tetteh Yohuno, said following a request for security support to ensure law and order, the police mounted a number of barricades to guide worshipers into the church and a mounted pavilion outside the church premises.He explained that the police did not anticipate such a large crowd because the church officials said it was a normal Sunday service.According to Mr Yohuno, at about 6:30 a.m., the crowd overwhelmed the police personnel on duty and started pushing the barricades away and by the time a police and military reinforcement reached the church premises, there had been a stampede, resulting in the deaths. He said beside the 15 people who were seriously injured, some with broken limbs, many others collapsed but were resuscitated. He added that the police would conduct full-scale investigations into the matter.A minister of the church, Rev. Sam Mc-Canaan, described the casualties as unfortunate and unprecedented.He said during normal Sunday services, nearly 15,000 people worshiped at the church “but the numbers today seem to be more than 45,000”.“We are very devastated; it is very unfortunate and we are very sorry. We have to do a thorough work next time to make sure it does not happen again.”He said the possible reason for the large outpouring of believers was the announcement of the introduction of the repackaged anointed water by Prophet T. B. Joshua. He said that announcement could have fueled speculation that the anointed water would be distributed during yesterday’s service. “It was supposed to be a normal church service and not a revival,” he stressed.He commended the police for their response and added “but for them, we would have witnessed a disaster of alarming proportions”. ( Courtesy of GBC)