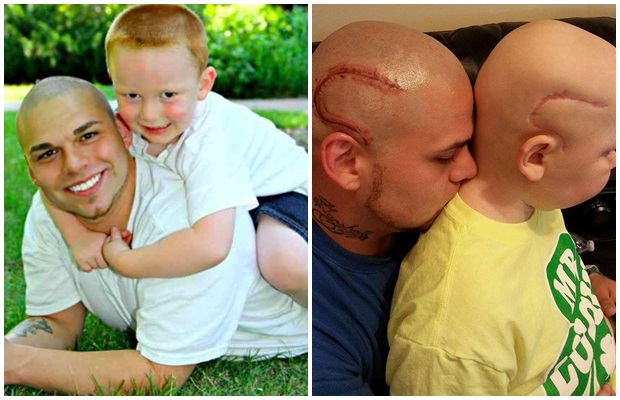 A dad Tattooed his son’s cancer scar on his own head to boost his son’s self confidence. When Gabriel- 8 year old-was diagnosed with a brain tumor in March of 2015, it was understandably difficult for him. Making matters worse, Gabriel was left with a noticeable scar on his head.

He told his father the scar made him feel like a “monster.” And so, Josh Marshall told his son he’d get the identical scar tattooed on HIS head. “I told him if people wanted to stare, they could stare at both of us.”

Gabriel is now doing well and has been out of treatment for 9 months.

Marshall’s choice has supported his child’s certainty, as well as got an overflow of commendation after he entered a photo to the St. Baldrick Foundation’s #BestBaldDad rivalry, in which 55 fathers who shaved their heads in backing of their youngsters with malignancy submitted photograph passages. Marshall’s photo was subtitled: