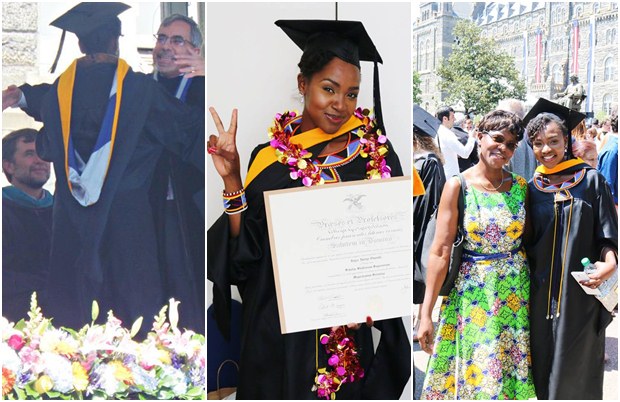 Former Citizen tv host Joyce Omondi who hosted Rauka gospel show with Njugush has finally graduated with a masters degree at Georgetown University in USA. Joyce Omondi graduated on Friday at George town University with a Masters of Science in Foreign Affairs which concentrated in International Development plus honors certificate in International Business and Diplomacy.

Joyce Omondi had left Citizen Tv to further her studies in International Development in the year 2013 and it seems that her dream of schooling was surely valid then. On a statement shared by her on her facebook page, Joyce Omondi spoke of how the road has been and above all thanked GOD for his incredible grace. It’s still sinking in that this journey has come to an end! These past two years have been some of the most difficult, joyous and life-changing years of my life. The road to this point was filled with laughs, tears, sleepless nights, loneliness, and joy, but above all God’s incredible grace! I want to thank my precious family and friends for their tremendous love and encouragement; for pushing me on when I felt I couldn’t go any further and upholding me in prayer in the many days where words would fail me.
Beloved, ‪#‎KWELI‬ Baba Yumwema and we truly are ‪#‎CONQUERERS‬ in HIM! To God be ALL the glory for the great and mighty things HE has done! Joyce Omondi was born in Nairobi and studied in the Kenyan city before proceeding to Knox College in the United States between 2006 and 2010 where she majored in both Economics and Integrated International Studies (IIS). She was a Sophomore Senator and a Knox Ambassador while in college.

She learnt to sing and play the piano, and started performing early in life at church gatherings in Woodley, Nairobi and later graduated to singing in the Church choir. In Knox College she was part of the Harambee Choir.

On returning to Kenya, Joyce released a series of gospel singles and collaborations including Conqueror and Kweli which means “Truly” in Swahili. Kweli is one of her most popular hits and was dedicated to her Dad who survived the 1998 bomb blast at the American Embassy in Nairobi.