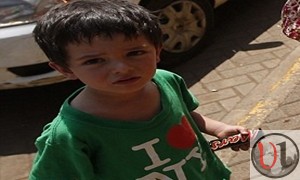 Such an inspiring moment when a young boy takes courage and tells of a terrorist who might be on the verge of pointing a gun at him and killing him. The words from the 4 year old Elliot Prior were  : “You Are A Bad Man” , and the terrorist spared the boy and asked for forgiveness. Elliot prior confronted the gunman after the gunman had shot his mother on the leg while he was standing with his sister Amelie. According to the Daily Mail:

His mother, Amber, told of her family’s terrifying escape from Al Shabaab terrorists who butchered 62 people in the Nairobi shopping centre.

The film producer had been queuing to buy milk in Nairobi’s Westgate Shopping Centre when the militants struck.

She hid under a cold meat counter in the Nakumatt supermarket for an hour-and-a-half with her children beneath her before terrorists finally found them and shot her in the thigh.

After discovering the advertising producer was of French origin, the men began to plead with her and claimed that the Muslim faith ‘was not a bad one’.

‘Naturally, I was going to say whatever they wanted and they let us go’.

Bizarrely, the terrorists handed the children Mars bars before they fled with two other children