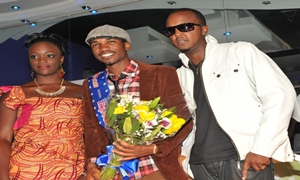 The Competition was a stiff one after intensive three weeks auditions across three universities which include USIU, Daystar University and Kenyatta University.

Daniel was the out standing winner and he took home a fully sponsored single and one video courtesy of Samsung Electronics East Africa.

Daniel will immediately head to the studio to work on his first single and video under the mentorship of Kevin Wyre who is the Samsung’s Brand Ambassador .

The new single will be released in two weeks’ time and the video at a later stage.