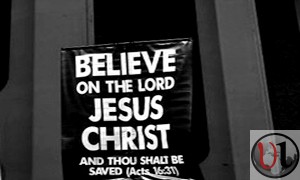 Two street preachers carrying signs that read “repent or else” and “Jesus saves from sin” were protesting against homosexuality at a gay pride event in Seattle, Wash., on Sunday, and were physically attacked, punched and kicked by attendees who warned them that they “better leave or else.”

A man attending the Pridefest event recorded the altercation on camera, and his video is now “a key piece of evidence against two suspects,” KOMO-TV reports.

Jason Queree, 36, who is one of the two suspects, is shown repeatedly hitting a street preacher in the back of the head while he’s on the ground. Queree has been arrested 29 times since 1995. Both men are facing misdemeanor assault charges.

The witness who shot the video told KOMO-TV that the crowd was incited when one of the street preachers said to “repent or go to hell.”

Ruben Israel, who’s been a street preacher for 33 years and is a member of Bible Believers, which has 74 chapters nationwide, told The Christian Post on Friday that he has encountered attacks similar to the one in Seattle.