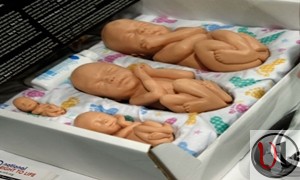 Limiting the right to an abortion comes with a high price tag, Bryce Covert points out for Think Progress, a liberal think tank, because letting those fetuses be born and live their lives will cost taxpayers a lot of money. Citing a Congressional Budget Office report on the House-passed bill to ban abortions after the fetus is 20 weeks old, Covert notes that the bill, if passed, is estimated to increase Medicaid costs by $75 million to $400 million over 10 year

Covert’s analysis assumes that most of the women who would be denied a right to abort their 20-week and older fetus would be poor women, and the nation would be better off if the poor did not have children. If born rather than aborted, he explained, their children would also be poor and a net drain on taxpayers.

“Providing women who seek an abortion with the services they need doesn’t just avert government spending on unwanted births. A recent study found that women who were unable to obtain an abortion were three times more likely to fall into poverty in the subsequent two years than those who succeeded. That likely means more women who need to access federal programs,” he wrote.

This is just against the word of GOD and i wouldn’t ever agree with this. What about you?