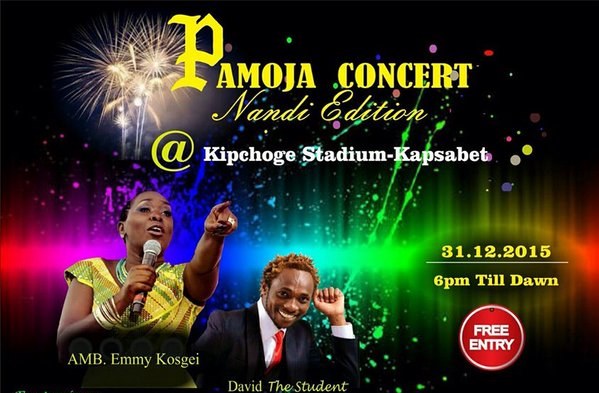 Award winning gospel artiste Emmy Kosgei is set to host another new year’s eve event in Nandi county. Emmy Kosgei in partnership with Nandi County will be headlining the Chebarbar as they host over 20 artistes at the Pamoja Peace Concert. The event  initially dubbed Pamoja Peace was founded by Daddy Owen and Emmy Kosgei in the year 2013 with its main agenda being to preach peace to the masses in Kenya having in mind the General Elections which plays a big part in affecting lives of Kenyans.

Later the concert turned to be an annual new year’s eve concert with Daddy Owen and Emmy Kosgei playing the host of the concert. Now Emmy Kosgei  will be headlining the concert in partnership with Nandi County at the Kipchoge Stadium as they plan to share the plans of the county at a night that plans to gather over 30,000 people from Nandi County.

David the Student will be the main MC with other artistes like Solomon Mkubwa, Vicky Kitonga, Mwalimu Kendagor, Evelyn Wanjiru, Lillian Rotich expected to perform among other great artistes.