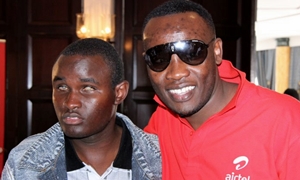 Daddy Owen Our Brother In Christ, An Award Winning Gospel Musician says he gives glory to GOD for making his dream of performing on an event like the Presidential Inauguration With Denno Come To Pass. We have a New President Uhuru Kenyatta and he was inaugurated yesterday at Moi International Sports Stadium and among other artistes Daddy Owen was one of them who performed.

Daddy Owen performed with Denno their song called Mbona which speaks about non-discrimination of the disabled. Daddy Owen actually “dream’t” that he and Denno would perform on a big event like the presidential Inauguration.

As he said: Denno is amazing, i remember telling him that one day we will perform “Mbona” in a big stadium and people will be singing along, i thank God.

Well for sure dreams come to pass.

Daddy Owen has zealously put all his effort in pushing for the ‘disabled’ to be given opportunities rather than just sympathy and also for them to be treated fairly like normal people.

This can be exemplified in his two songs Mbona (With Denno)  and also Twende Kazi which he did with  Emmy Kosgei, Denno, Wyre and Miss Karun.

You just got to love Daddy Owen, as he picks his inspiration first from GOD and also from his Brother Ruff tone Igigi who has been pushing for Peace through Tuvuke Initiative.