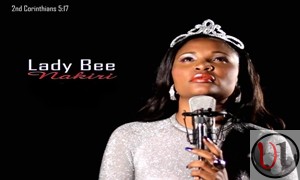 Lady Bee ( Bernice Nduku) gave her life to Christ more than a year ago when she took the turn from secular music to gospel music. She also took sometime before she released her first song called John 316 which was a blessing to most who took time to listen. This song has been her main message since she made the decision that Christ is the Answer and she has took the commission of spreading the word of GOD to schools and also to Prison. Now Lady Bee has released her second single called Nakiri which is a confession of how GOD has guided her in her life. According to Bee :

Nakiri is a Swahili word that means i confess and in this song I confess that truly Jesus saves,changes,forgives,washes away our sin,by the blood of Jesus today I confess am born again.JESUS IS LORD

Depicted from the book of 2 Corinthians 5:17 where the Bible says : “For whoever is in Christ He is a New Being”

Watch The New Video Below :