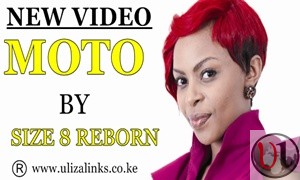 Linet Munyali has done her second music video called Moto which comes after getting born again. Size 8 Reborn new video MOTO comes after she released Mateke which got thousands of airplay and views on you-tube. Size 8 says it was not easy for her when she got born again as some people were not able to understand her,  which was one of her greatest fears. Only to find love later from left right and center after people came to know that she was taking the right journey of Christ and GOD  Alone.   Now presenting Moto By Size 8 which means the fire of Christ as she said in a recent interview. Video Directed by Sammy Dee and Audio by Jacky B