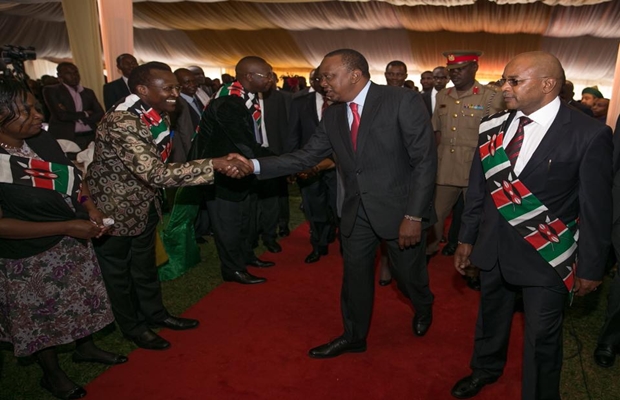 The 14th National Prayer Day was underway at Safari Park. The inter-denominational prayer day has brought together various religious representatives in one space to pray for the country. The major issue addressed by the speeches this time is the IEBC Stalemate. President Kenyatta has been quoted saying “God has already sorted the issue of IEBC and all we need to do is follow The Constitution.” He has emphasized the importance of observing the guidelines set by the constitution. William Ruto, in his speech today said,”One thing I am sure and confident about is we have God on the side of Kenya. It doesn’t matter the magnitude of challenges we face.” The church has emphasized on the need for the leaders to address the stalemate by having talks that will lead to a solution. They have expressed their concern on the rising political temperatures. IEBC Commissioners have refused to budge despite the pressure the opposition has put to have them out of office. They have defended themselves using the constitution, stating that the necessary steps ought to be taken to remove them from office.

This year’s prayers come amidst weekly protests organized by CORD which they have said will continue until their demands are met. The protests have added an extra day to the weekend, as Kenyans opt to stay away from the CBDs on Monday, due to the tragic and destructive turn that the ‘peaceful’ protests take.

Kenyans have expressed their disappointment at how the attendance of the prayers are secluded for the top officials, some asking for such #NationalPrayers to be held publicly at Uhuru Park where Kenyans are free to attend and pray for their nation together with the leaders. Should the next National Prayer Breakfast be at a public ground?

2ND CHRONICLES 7:14: IF my people, who are called by my name, will humble themselves and pray and seek my face and turn from their wicked ways, then I will hear from heaven, and I will forgive their sin and will heal their land.