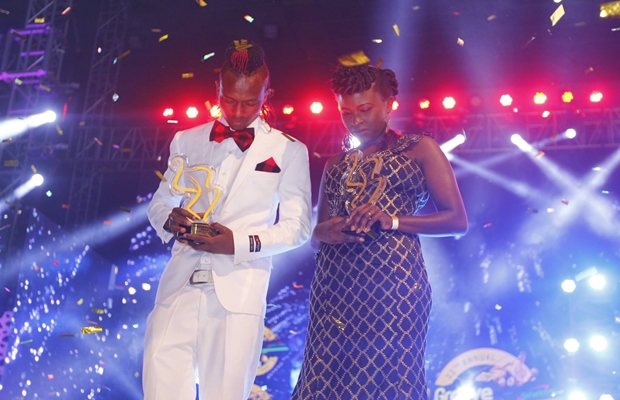 A few highlights to the event crowned the experience.

The event was hosted by Size 8, DJ Soxxy and Dr. Ofweneke. Panelist Awards are the few categories left to the Groove Awards Panel to decide. The categories are not open for voting. This year’s winners went to Mercy Masika- Skiza Tune of The Year, Pitson-Songwriter of the Year, Sammy Dee- Video Producer of the Year for the 3rd year in a row and Saint P for his exemplary audio producing over the past year. Big Ted and his crew were also awarded for being pioneers of ‘Gospel Rap’.

Female Artist of the year Mercy Masika was the winner of the day. She took home 3 awards, 2 in which she was nominated and 1 panelist award  for her song Mwema; which won The Skiza Tune of The Year. Her mother, who is a veteran in Kenya’s gospel music industry; was present on stage as she took each award.

One of the shockers of the day was The Male Artist Award. As soon as the commentator mentioned the category, the crowd was shouting names. “DADDY OWEN! PITSON! EKODYDDA!” L-Jay Maasai was crowned 2016 Male Artist of the Year, something which was least expected considering the names he was up against. He climbed to receive his award with his mother holding onto his left arm. L-Jay attributed his success to the long prayers his Mum’s long prayers.

Kelele Takatifu had their name under Group of The Year Nomination Category. They won this time, on their 5th nomination, and they couldn’t hide their joy. They recognized the support of their family members, with Moji; remembering his late mother who was present for the awards some years back, but who is now in heaven. It was an emotional one for him as he confessed that it is something he doesn’t like talking about. “Mummy tumeshinda,” he said as he raised his trophy to heaven with one hand.

The Dance Group of The Year JIMS&DIMS took the award home after 5 years of consistent submissions. Dressed in white, they climbed to the stage elated at their hard earned reward. DJ RUFF won DJ of the Year against the big names in the industry. He took the award as a pat on the back, and a challenge from his supporters. “Challenge Accepted!” he said as he ended his speech. The artist’s performances were backed up by an awesome band who gave a different tune to the music. JFam’s wave and all Ekodyda’s performances were full of energy. They had the crowd on their feet singing along and dancing. Boss’ Nainua Macho performance was also very well received. The event marks the beginning of another year for those in the industry, who are expected to work even harder to have their work win souls, and be recognized for their respective efforts.