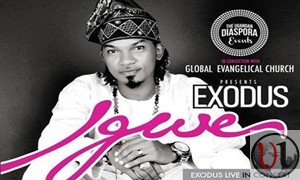 Exodus UG or Exodus who is an award winning gospel artiste of Ugandan decent will be part of a fundraiser concert to be hosted in Boston USA. The concert dubbed Exodus Live In Concert is organised by Uganda Diaspora Events in conjunction with Global Evangelical Church to support Children who fell victims during the Northern Ugandan War.
‘
According to Exodus he says : “The War occurred 8 years ago but it has left big wounds in the lives of these children which are under our care at the irenegleeson foundation and currently we have 10,000 children under our care.”

This is a worthy cause as the organizers together with Exodus have taken the task upon their own hands.