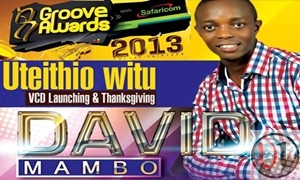 Groove Awards Winner David Mambo awarded for Central Song Of The Year (Rucia Rwaku) will be launching his fourth Album in August. After hosting a successful Thank You concert in Thika Stadium David Mambo is set to launch his new  VCD album “Uteithio Witu”.  This will also be a thanksgiving concert as He just wants to give all glory and praise to GOD for the far he has brought him

The Launch will be held at PCEA St Andrews on 4th August from 1-6pm.