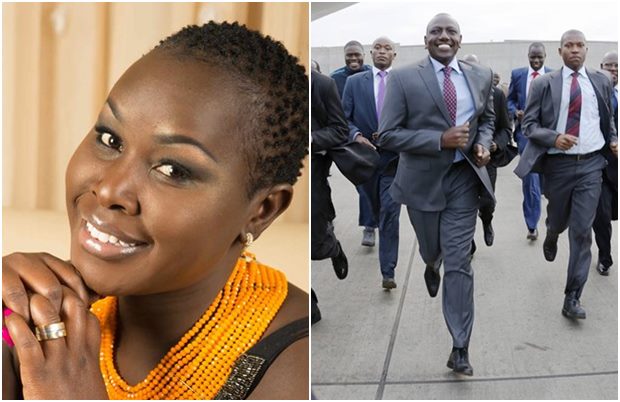 Award winning gospel singer Emmy Kosgei went into jubilation after receiving the news that Deputy President’s, William Ruto, ICC case was dropped with the judges ruling ‘No Case to Answer’.

The Deputy President’s case was terminated along side former radio presenter Sang who had been accused on inciting people to violence after the 2007 elections. In a note Emmy Kosgei looked back in the day when she was involved in a prayer ceremony for the D.P after he was declared a suspect for the 2007 post election violence.

Tuesday’s announcement marks the second time the court has had to admit defeat in its attempts to prosecute alleged ringleaders of the violence that left more than 1,000 people dead and forced 600,000 from their homes in Kenya.

Ruto, 49,and his co-accused radio boss Joshua arap, 40, have both denied three charges of crimes against humanity – namely murder, forcible deportation and persecution – arising from Kenya’s disputed elections in late December 2007 and their violent aftermath in early 2008.

Prosecutors say more than 1,300 people died and some 600,000 were left homeless in the country’s worst violence since independence from Britain in 1963, reports Aljazeera.